This website contains adult material and is only suitable for those 18 years or older. Click Enter only if you are at least 18 years of age.

I received the Innokin Coolfire recently for review and realised that it is actually the first Innokin product that I have tested. The brand has been around for longer than I can remember but for some reason I’ve not been tempted by any of the previous products. On paper, there’s little outstanding about the Coolfire mod as it is very basic in functionality. The Zlide tank however, has received a lot of accolades from the POTV forum so I was very keen to test this kit. Did it deliver? Read on for my thoughts on the Coolfire Z50 Zlide kit. 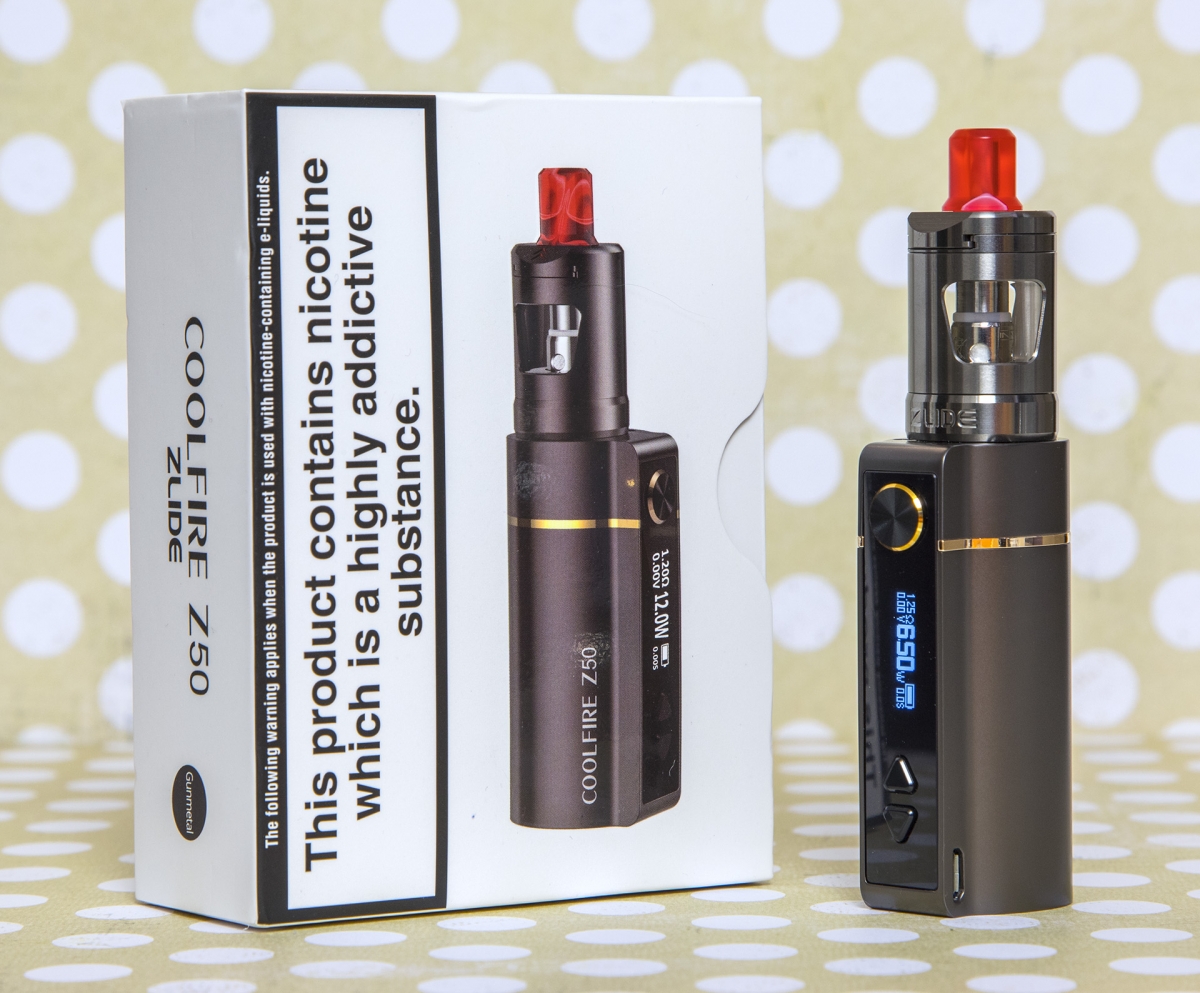 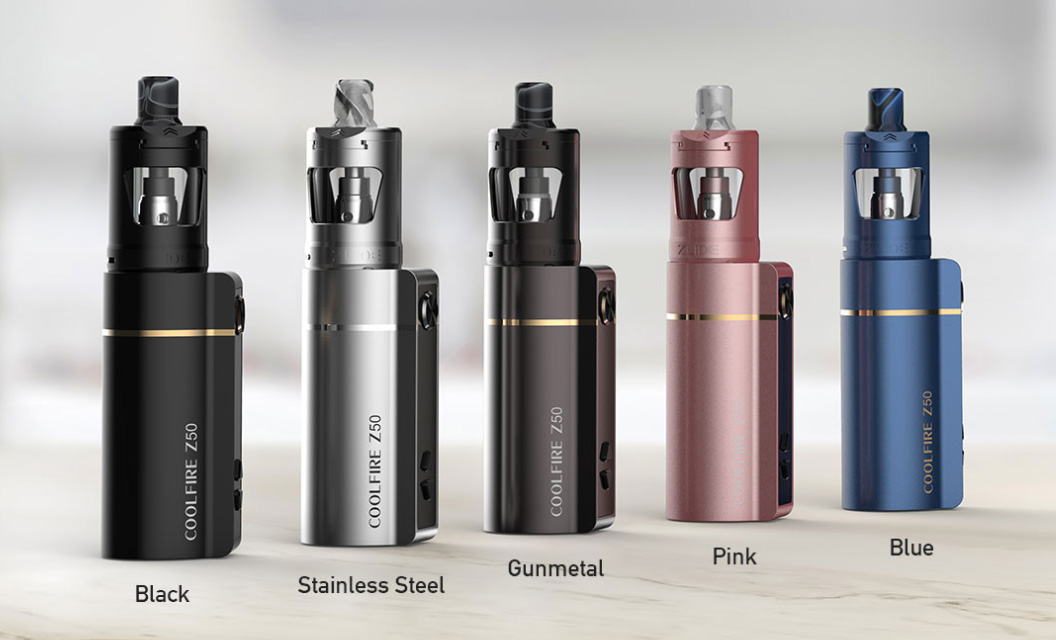 The kit comes really well packaged and looks very high end in presentation. What strikes you even before opening it up is the sturdy weight, it just feels expensive but not to heavy. The outer box ‘zlides’ open to reveal the inner box which is minimalist white with only the kits name printed on the flap. Under the flap reveals the top layer which contains the Coolfire Z50 mod and the Zlide 22 tank along with a spare glass. 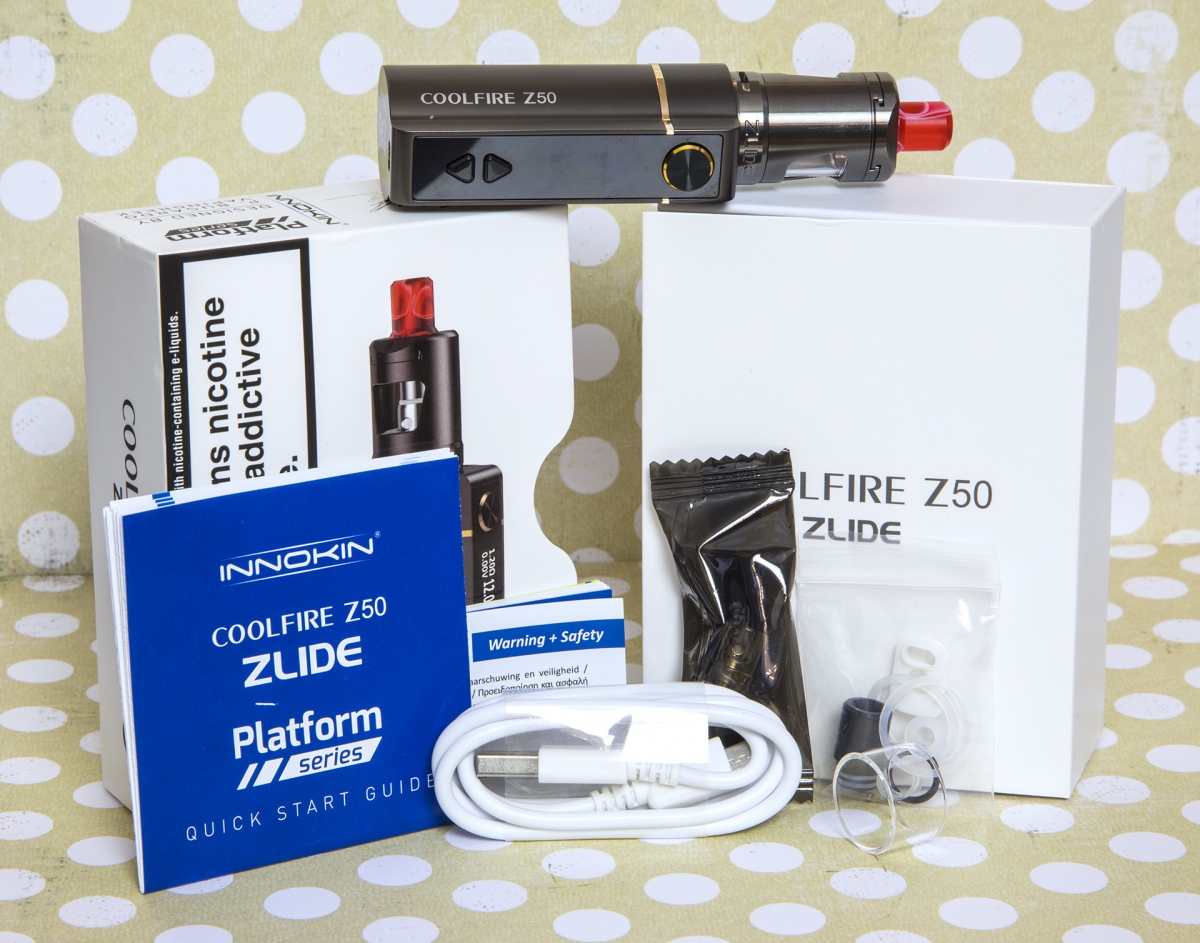 Underneath that are the spares and accessories which include:

Unboxing had already left a good impression as it oozes class, but getting hold of the mod and popping the tank on was even better. I was already falling for this kit even before I had tested it, I could only hope that the Zlide tank met my picky expectations. There’s nothing special about the extras, the spare drip tip was a nice touch but it’s a bit basic.

One of the things that leapt out at me was the physical ON/OFF switch on the base. This is a superb feature for in your pocket or bag, especially when travelling for peace of mind, and something I would like to see more of.

I didn’t research the Z50 kit prior to receiving it so I had no idea what features it had, it turns out that there are very few. This is one of the most basic functionality mods I have come across, not necessarily a bad thing for MTL stock coil users that simply want a fire and forget device.

After I spent a few minutes admiring the elegance of the mod, I turned my attention to the Zlide 22 tank. Visually it’s very impressive and well engineered, the caged design protects the glass from accidents and the slide top looks and functions really well. The AFC (Airflow Control) protrudes ever so slightly which makes it so much easier to adjust when it’s on the mod (a very nice touch). 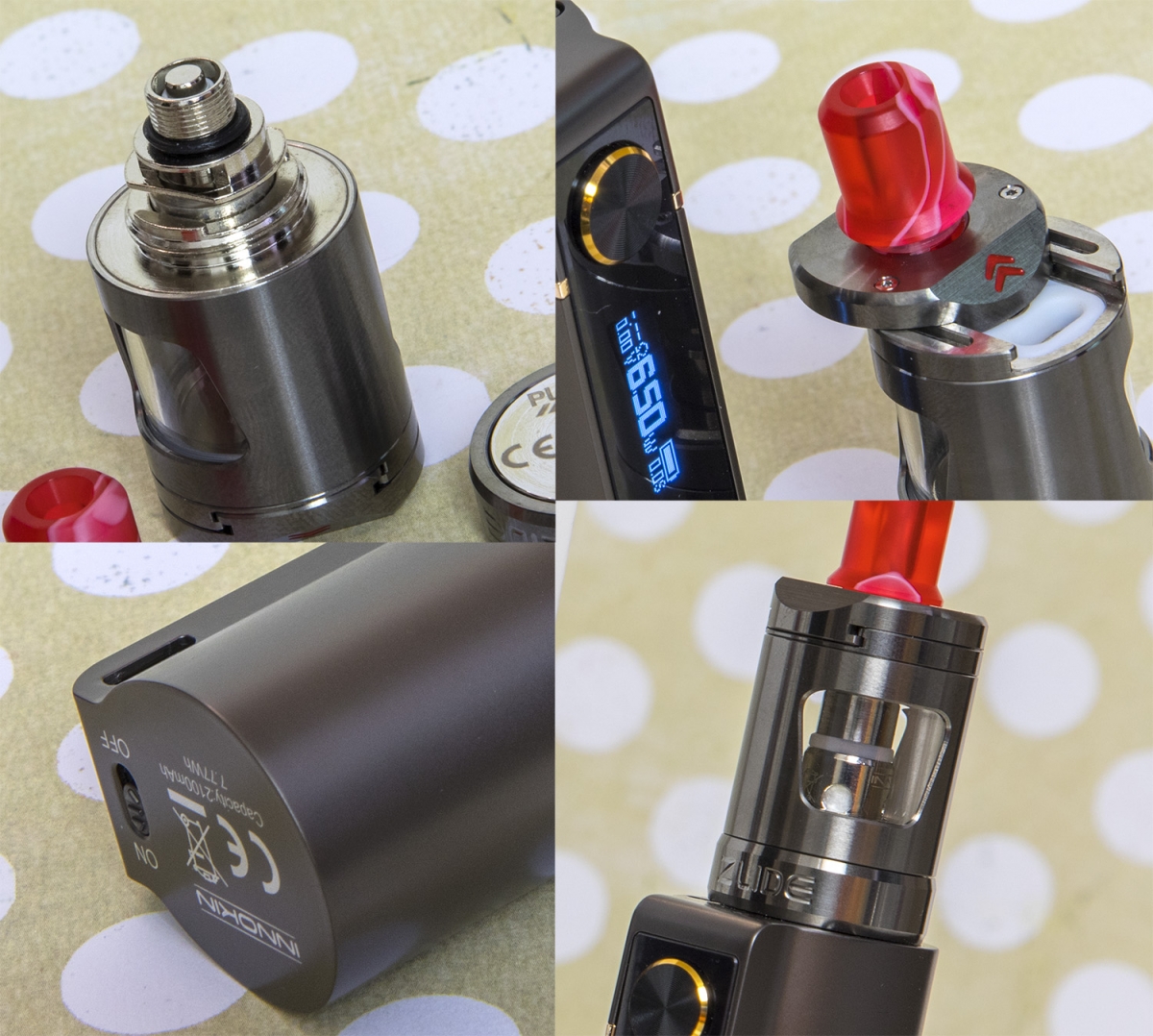 As I have already mentioned, the mod looks so classy with the contemporary design, and the semi matt finish adds to its looks and also prevents it from being a fingerprint magnet. The screen obviously attracts hand gunk but that’s to be expected. It fits nicely into your hand and the fire button is intuitive for either finger or thumb firing. The adjustment buttons are well positioned and I had no issues whatsoever with accidental adjustment. The only negative I can come up with is the hard edges, the screen edge in particular feels quite hard in your hand. 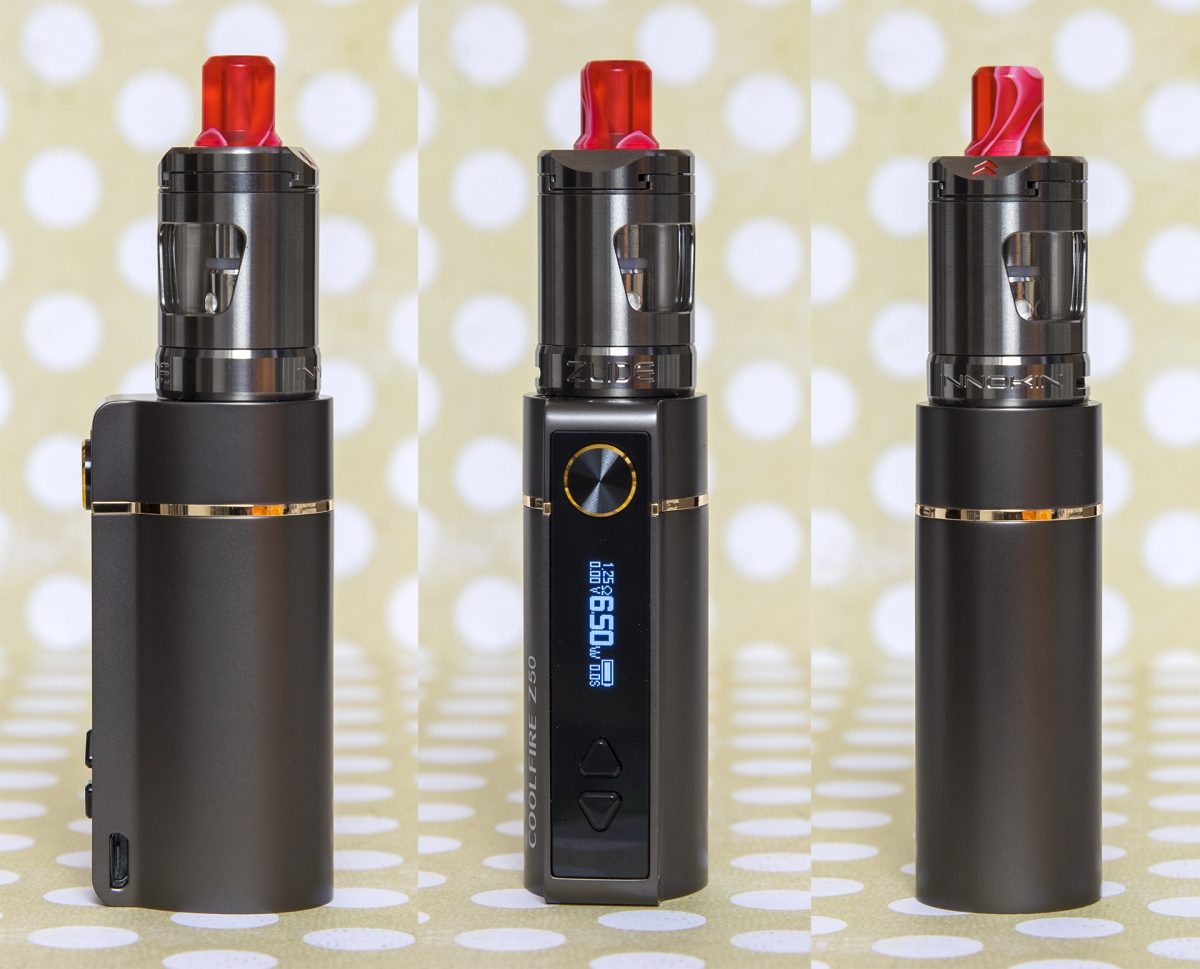 I try to avoid RTFM (Read The F**king Manual) wherever possible and try to suss out the controls on my own. It didn’t take me too long at all to figure out the Z50’s settings and operation, mostly due to the fact that the Z50 is very basic, so basic that I had to look at the manual to see if I wasn’t missing something! Nope there really is only a few things you need to know:

There is a nicely detailed manual (fold out pamphlet) if you need it but even that is basic.

Most users won’t bother with voltage mode as watts is easier to fine tune, but old school users might enjoy the feature. So all you really need to know is how to turn it on/off and adjust the power.

The matching colour Zlide tank suits the mod perfectly and has a few more features to discuss. The main one (suggested by its name) is the slide top-fill system which locks into place with the modified 510 drip-tip. So you first need to either remove or raise up the drip-tip to unlock so you can slide the top cap in the direction indicated. 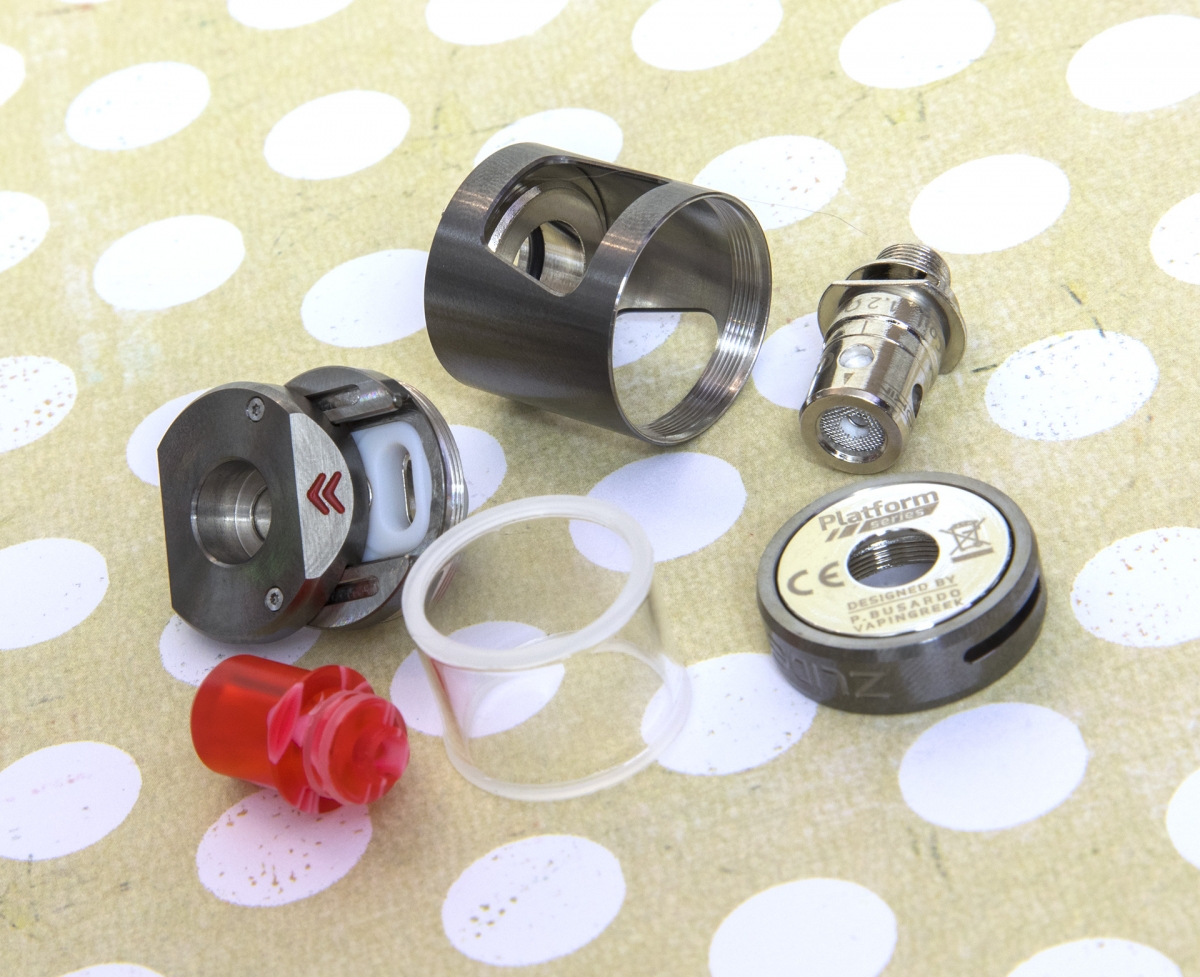 This is marked with a distinct arrow on one side. Once opened, it reveals the juice fill port with plenty of room to fit your eliquid bottle nozzle, fill it up and slide it back into place, insert the drip-tip to lock it into place, you can use your own 510 drip tip if you prefer not to use the locking feature but you risk it coming open in your pocket.

The tank strips down easily and logically, everything is well machined and the threads feel smooth. Changing the coil is done by unscrewing the base, then simply pulling out the old and pushing in the new between the two flats in (after priming), screw the base back on. The coils are well made and have decent sized wicking holes. The plug-n-play press fit works really well and is not to fiddly to remove.

There’s one little feature I can’t recall seeing on other 22mm tanks I own, and that is the subtle protruding AFC (Airflow Control). This small detail makes such a difference when adjusting the airflow while on the mod, it’s just so easy to get to and adjust. Nice one Innokin!

Changing the glass is a lot easier than I was expecting. It takes little effort to slide it out of the cage, the silicone seals are a perfect fit without being too tight and wedging everything stuck, a small thing but shows the good quality design.

I started off with the pre-installed 1.2Ω coil with 20mg nic salts. I was keen to see what all the fuss was about with the Zlide and even at 9 Watts I soon found out. The flavour was right on the money! I was also surprised how fast it hit, for a traditional Kanthal coil it almost hit like a meshed coil. It seems like a fraction of a second and you get a smooth powered vape. I worked my way up to my sweet spot of 12 watts on this coil, and I really enjoyed the warm and flavourful vape.

The airflow is good and the AFC closed off to the smallest hole gives you a nice tight MTL (Mouth To Lung) draw, opened up fully gives a restrictive DL (Direct Lung) hit. As previously mentioned, the AFC ring is very easy to adjust yet firm enough not to accidentally change. The view of your eliquid is clear and you can see the level from top to bottom. The coil wicking holes sit as low as possible so you can almost run it until empty without any dry hits. 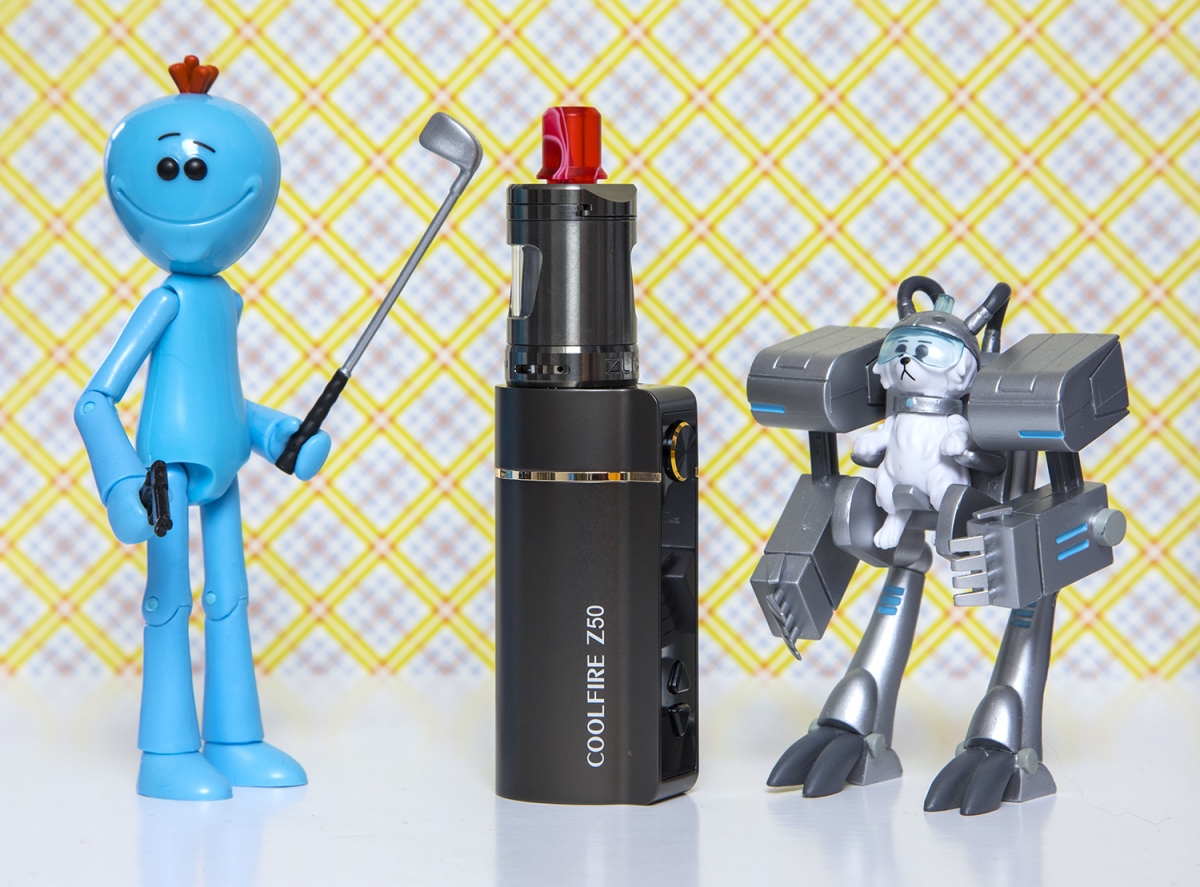 After I used the 1.2Ω coil for a few days, I then moved onto the 0.8Ω Z coil which is another plain wire Kanthal and suitable for 50VG/50PG liquid. For this one, I used some Manabush 6mg freebase eliquid for a restrictive DL vape. Opening up the AFC fully and cranked up the power to the max 18 Watts (after breaking in the coil), I was pretty surprised how good this coil was. I was getting plenty of flavour, a nice throat hit and surprisingly large vapour production. I could quite happily chain vape it without any hints of a dry hit. I lowered the wattage to 15 watts and closed the airflow for a MTL draw, it was good but not as enjoyable as the 1.2Ω coil for my tastes.

For me this Z50 and Zlide 22 suits MTL (Mouth To Lung) vaping better, it is where the Zlide excels. There are a few Z Coil options which are compatible with the Zlide:

The battery life from the 2100mAh cell was pretty good and lasted me just shy of two days with regular use, noticeably shorter on the 0.8Ω coil for obvious reasons. I found myself topping up the battery each night to be on the safe side. I didn’t notice any battery sag as the charge percentage lowered to around 15%, though I recommend charging before it drops under 30% to prolong the mods lifespan. Charging felt pretty slow to what I am used to, generally over two hours from 30% to 100% and the mod gets quite warm as there are no battery vents which is a little surprising. It’s not one I would trust left to charge unattended.

One of those kits that’s simple and works well, more importantly it’s one of those kits to love. I am more than delighted with the gorgeous looking mod and the superb Zlide 22 tank with stock coils to rival mesh, and I still find myself admiring the Z50 between vapes and it takes pride of place on my table. Part of vaping isn’t just what you inhale, the visuals and kit satisfaction shouldn’t be ignored.

However I would say this kit is more suited to MTL users. Sure, it will do a restrictive DL, but I would say there are better alternatives out there. For me, this will firmly sit in my MTL rotation.

Innokin visual designers have come up with a stunner to equal the Zlide 22 tank, in this case. ‘Looks Over Substance’ wins out and I would buy this kit in a heartbeat after holding and testing it.

Despite the Coolfire Z50 mods shortfalls I simply LOVE this kit. I can’t imagine I will use the superb Zlide 22 tank on anything else, likewise I can’t see me putting a different tank on the mod as they make a great couple. My biggest concern is the lack of battery vents. That said, I have mods that are over 3 years old without vents and no problems (touch wood). Being so basic doesn’t bother me, wattage set and vape is fine for this kit. 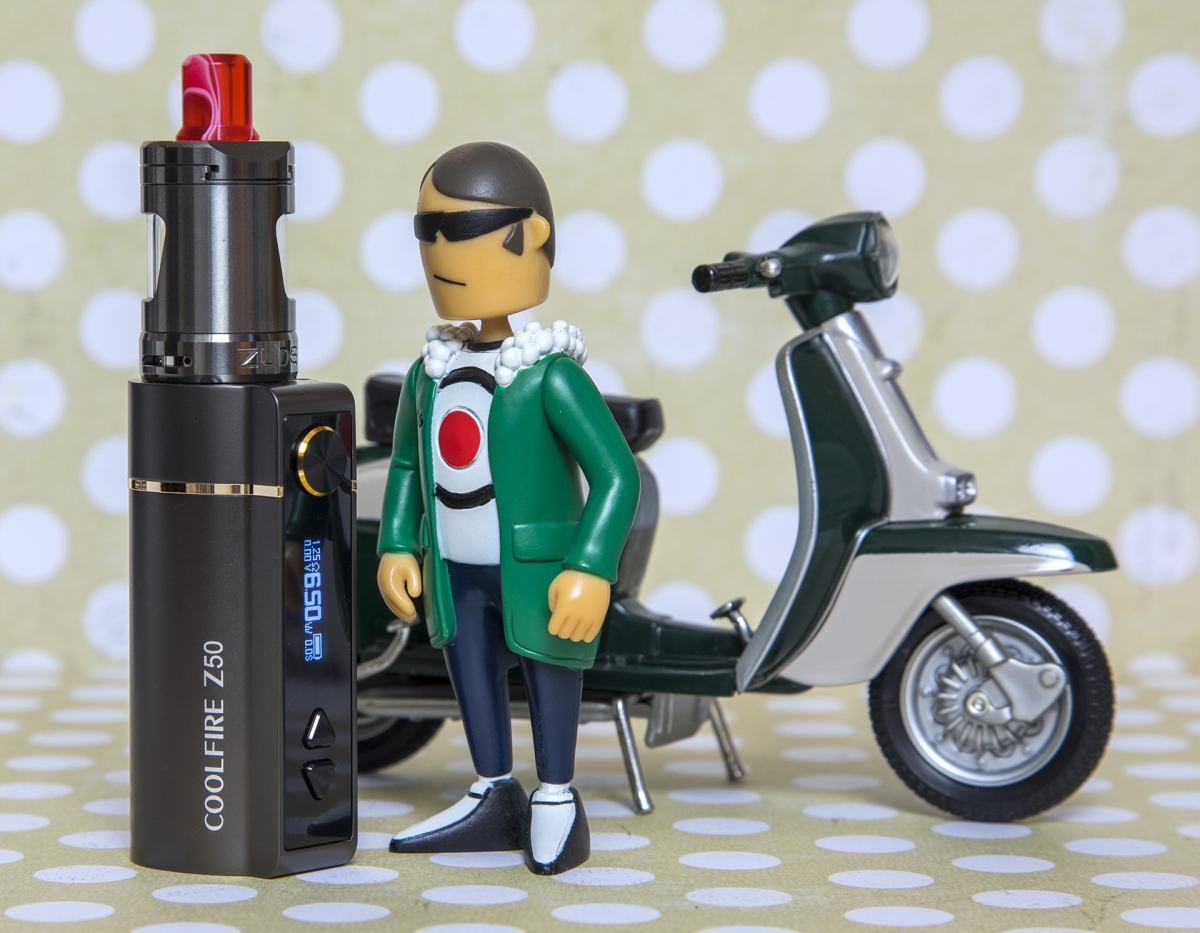 If you are a manufacturer, distributor or vendor and have an item that you would like reviewed by our team please contact us here.